Posted at March 11, 2013 | By : gilpineng | Categories : News | Comments Off on Texas State Veterans Cementery at Abilene designated a National Shrine 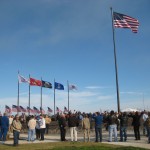 The U. S. Department of Veterans Affairs presented staff at the Texas State Veterans Cemetery at Abilene with a plaque, designating the cemetery with National Shrine Status. The VA bestows national shrine status only on veterans’ cemeteries that meet the highest of standards of design, construction and maintenance of the grounds sacred to the honor and memory of those interred or memorialized there. “Earning National Shrine Status is quite an honor,” Jerry Patterson, chairman of the VLB, said in a news release. “Texans respect the service and sacrifice of our veterans, and this designation is simply further evidence of that tradition.” Chad Gilpin had the privilege of serving as project manager for the Texas State Veterans Cemetery’s Cemetery Program which included planning, design and construction of the State’s first four veterans cemeteries located in Killeen, Mission, Abilene and Corpus Christi. As the project manager for the Texas State Veterans Cemetery Program, Chad led a multidisciplined project team of architects, landscape architects, irrigation designers, MEP and structural engineers. Chad is proud to see a project that he put so much time and effort into be honored with the National Shrine Designation.